According to Hittite sources, the Hulaya river land is fundamental to reconstruct the scenario of Cainite migration because Nata (Nod) belongs to that region. Besides, my interpretation of Maiel (LXX, TM Mehujael), the name of the fourth Cainite) leads to May, a toponym in Korna’s neighbourhood. While Ramsay places Mai Chai ("Mai river") immediately south of Korna (1917 [1]: Plate IX), Sterrett (1888 [2]: 148-153) names the same river "Tekke Tchai" and identifies Dinorna with Nea Isaura, not with Korna. The equivalence between Korna and Dinorna argued by Ramsay and lately accepted by Belke in TIB 4 has been highly disputed and lacks solid grounds because historical and archaeological sources do not determine a geographical position. Lately Forlanini has provided some more reasons to maintain the identity of Korna with Hittite Hurniya (2011 [3]). Unfortunately, the same uncertainty forbids a precise identification of Hulaya river either (Erbil & Mouton 2018 [4]), even if there is scholarly agreement that it should correspond to Çarşamba Çay (Hawkins 1995 [5]: 52-53). A viable solution to this puzzle may come from the interpretation of the name "Korna". From the list of dioceses at the Council of Chalcedon we read of πόλεως Κορινῶν (TIB 4: 194). Both Κόρνα and Κορινῶν can be explained with a simple shift between synonyms, because the Hittite huliya ("wool") is a symbolical representation of the meandering course typical of other Anatolian rivers, such as Hulana (Porsuk Çayı). This river name features an alternative designation of wool and may provide a valuable key to explain the change from Hittite Hulaya to Korna-Korinon, because in many cases the initial laryngeal survives as a velar stop, the vowel /u/ often develops into /o/ and the liquid /r/ can easily be equivalent to /l/, because of the merger of liquids into a flap-like sound in the eastern Luwian dialects (Yakubovich 2009 [6]: 14; Rieken & Yakubovich 2010 [7]: 216-217). The tentative scenario developed so far seems to correspond to what Melchert (AHP 65-66) maintained about hulana-, that it should stand for /Hulna-/ or /Holna/ - something that Kloekhorst rejects (EDHIL 358) - and also to his two additional remarks on the topic: the cluster /–ln–/ was so rare in Hittite, that it may have been pronounced with an anaptyctic vowel. The form Korna obviates the first problem, with a shift between two liquids, giving way to a much familiar cluster. The form Korinon introduces /-i-/ as an anaptyctic vowel and finally the suffix -on, representing the Milyan version of the Luwian -wann(i)-, typically used to form ethnonyms. At the end of my reasoning, I dare to add a further suggestion that may help to explain Dinorna where some scholars would place Korna. May River is an alluvial stream that can become dangerous during winter (Driessen & Meester 1969 [8]), and it well deserved the Greek appellative δίνη (KH 49), that is, "whirlpool, eddy" (LSJ). I think it is not far-fetched, given the tortuous destiny of Anatolian laryngeals, to divine something like *Din-(e)-(k)-orna, that is the "torrent Korna," because that’s exactly where Dinorna sits, in the middle of the alluvial fan of Hulana-Korna river. Would it be helpful to settle the question about the supposed identity of Korna and Dinorna? How could we reconcile this evolution of the toponym that relies on the Hittite name Hulaya becoming Korna, with the survival of Mai until nowadays? I would suggest that Mai was the name of the region delimited by this river, in other words its basin. 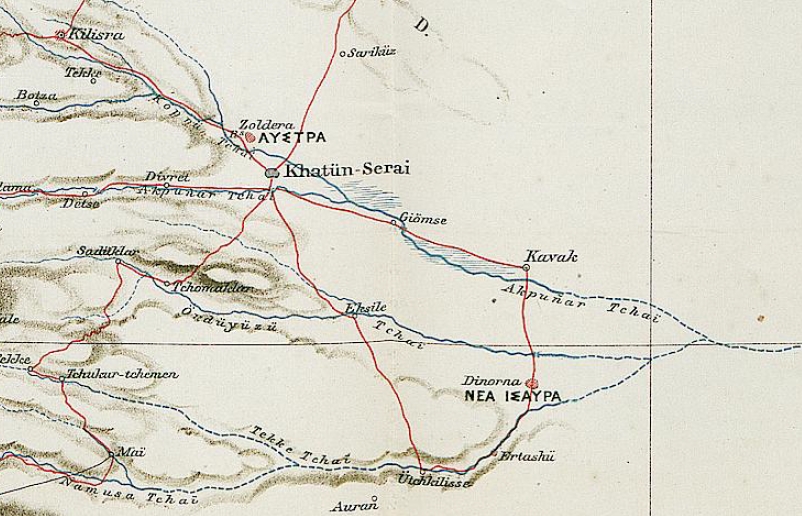